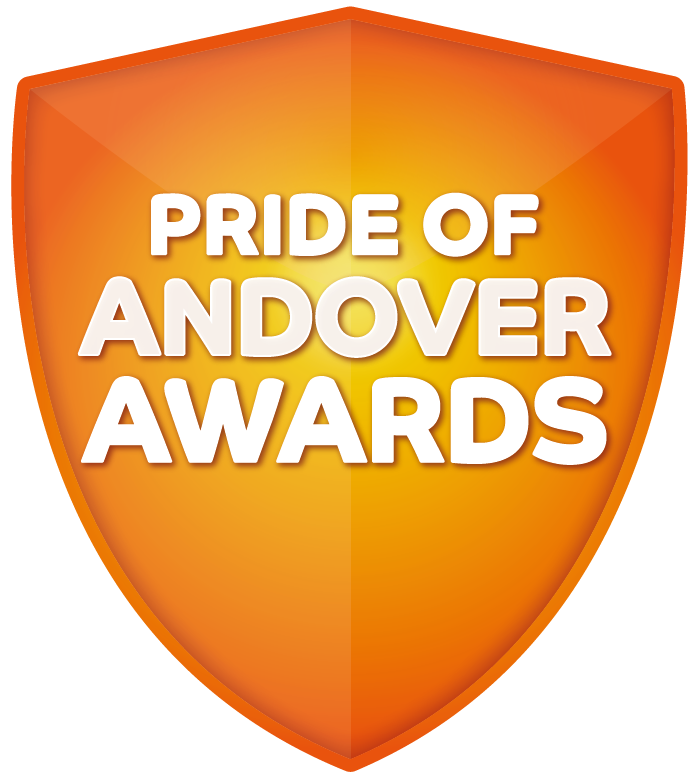 The 2017 award winners were announced at another fabulous evening, presented by Katie Piper and hosted by Steve Priestley.

Graeme gives his free time doing volunteer conservation work for Andover at the Anton River Conservation Association, something he has done for 23 years.

You will frequently see him taking groups on walks, giving tours around the lakes and rivers on various species of wildlife and their habitats.

Anne has always gone above and beyond anything that we could hope for. We are a small charity and our aim is to combat isolation and loneliness in older people in our community.

She is always ready and willing to help with anything from providing invaluable admin support to our enablement programme co-ordinator to fixing things and cleaning windows.

In fact there is nothing Anne will not turn her hand to at the drop of a hat.

After 30 years service with Andover Musical Theatre Company, and 10 years as chairman of the committee, in April this year Carol founded Starlights, the new youth theatre.

As well as holding down a full-time job, and her existing commitments to AMTC, Carol has devoted the last year to launch this new group, dedicated to educating and encouraging 11 to 17-year-olds into taking part in musical theatre.
Her passion and dedication knows no bounds, and the whole committee and cast of Starlights and the Andover Musical Theatre Company charity think that she is amazing and deserves recognition of her hard work.

Ethan cared for his mum after a severe car crash in 2014, having broken bones in her neck and back and having her arm amputated. She was in a coma for 16 days and Ethan was not able to see his mum until she came out of the coma. He has been looking after her each day.

As a family they have had many obstacles in their way but now have managed to overcome these. Danielle and Ethan are not only mother and child but have a special bond.

They approach each day with the outlook that live for today and look forward to everything.

Andover Powerlifting club was started by Pete Brown and Rob and was operated in a large store room in Andover Leisure Centre, it would have been in the late 1970s and was aimed at teenagers. At the club, people treated you like an adult, they were fun and Rob was at the heart of it and it was infectious, you wanted to train and be part of this group. Rob would always talk to you, gave nicknames and always took an interest. 30 plus years later he is now training the next generation and his passion and dedication should be celebrated.

Jason truly has made a huge difference to the local community through sport. He has volunteered his time in grass routes for 32 years. His time has been spent coaching and running teams, making them inspiring and welcoming to all. He has set up Ludgershall FC, Wherwell FC and and Test Valley Lions. He now runs Shooters FC which was set up in the 2009/10 season and continues to grow year on year, running fun days for all children so they feel included and empowered to try a sport.

Rob retired from Andover College (formerly Cricklade College) in October 2016. He had worked at the college for 40 years from 1976 to 2016. His photography and musical instrument studies gave Rob the ideal grounding from which his career developed both in education and his own performing musical career as a saxophonist and percussion player. He started his career at Cricklade Theatre (now The Lights) for 25 years running the technical department. Rob spent 15 years as the musical director of Cricklade College Big Band, which was an inspiring and influential experience in which students were encouraged to participate and learn the ropes of performing with the support, guidance and enthusiasm that Rob took to the role. Rob was leader of the carnival samba band, rehearsing, shaping the sound and bringing many people together to perform at a number of Andover events. The influence of this initiative is remembered as an inspiring legacy. Following Rob’s retirement, many students and colleagues have acknowledged their debt and how they have been inspired by Rob’s dedication, knowledge, passion and enthusiasm in their development as performers either as singers, actors or musicians. This is just a small snapshot of the influence Rob has had over the years.

Karen is involved in a number of projects within Hampshire and Test Valley volunteering her artist skills (cost of materials only) to help vulnerable people with a variety of disabilities. She truly believes that the therapeutic benefit of art cannot be underestimated. She looks at every opportunity and thinks 'how can my skills help the community?' And that sums her up in a nutshell! Which is why she deserves an award.

Mrs Renie Scott joined the Women's Royal Voluntary Service at Andover War Memorial Hospital in 1996. In the same year she became a reader for Andover Talking Newspapers, a service for the blind in this area. Her administrative talents were recognised in both the organisations with which she volunteered and she became the PA to the volunteer co-ordinator at the hospital and at the same time the secretary to the Talking Newspapers. In the latter job she controls more than 40 volunteers to serve 75 blind members of Test Valley and beyond. Renie has shown a constant level of commitment to her fellow citizens, with practised organisation, beautiful calm and a constant cheerful approach. All this for 20 years and still going strong.

Andover (BLF) Breatheasy Group was set up in February 2016 after the founder, Keith Brown, identified a need in the local area for greater support for people suffering from lung conditions. They worked with local health care providers to promote an initial meeting to determine if there was a desire for this sort of group within the local area. Keith and Ann had the drive and enthusiasm for this group to succeed, so from the initial idea it only took a matter of weeks for the first meeting. The first meeting was a great success and the group has gone from strength to strength since this time. It was officially launched as an Accredited British Lung Foundation Breatheasy Group in February this year. From the initial meeting of 10 members, the group is now going strong with 37 consistent members. The group meets on a monthly basis.

Hazel is a volunteer at Andover Age UK. For the past few years she has run an activity group on a Tuesday morning at The Bridge. From arts and crafts to organising singers, Hazel ensures all activities she organised stimulate the mind as well as encourages social interaction. Hazel organises birthday parties so everyone celebrates together, especially those without any family or friends around. She also arranges holidays, makes hampers for the group out of her own pocket and even visit them in hospital. She really does go above and beyond her role as a volunteer and is one in a million.

Emma works in The Bridge homeless drop-in centre. I can't think of another person that I know who has a bigger heart. She is kind, honest, warm, welcoming and genuinely cares for people. She does everything she can to help the homeless men and women in this community and is always wearing a smile. It’s great to know that if any of us should fall upon hard times and become homeless there is someone out there who really cares.

Alex has been on a life changing journey for the past two years on The Streets project. He has overcome many obstacles and has made many positive choices to change his life around. Within the project he has become a positive role model for others and rises to all challenges put in his path. When we first started working with Alex he was homeless and on the wrong path in life. He has now completely turned his life around and is a true inspiration to other young people who have fallen on hard times in the community.

For the last 10 years Teresa, has tirelessly given her time up in support of her partner Billy to help him set up and run the charity Veterans in Action. Teresa runs the office as well as collecting food from Tesco and Waitrose at the weekend and distributing it to veterans who are in need. Teresa works from dawn to dusk helping many veterans get what they need as well as looking after her family. The door is always open to all who need help whenever it is required.

Graeme gives his free time doing volunteer conservation work for Andover at the Anton River Conservation Association, something he has done for 23 years. You will frequently see him taking groups on walks, giving tours around the lakes and rivers on various species of wildlife and their habitats. He also gets involved in litter picks and river cleans and has helped set up a butterfly park which helps with research and development.

Created with by Bear Behind
Web Design & SEO